Thoreau was on to something here, and it wasn’t just living at Walden Pond. I’m realizing how often I over-complicate things and make things so much harder than they need to be. At work, with relationships, even with my food! I thought eating more Paleo-ish and cooking with a lot of whole foods would be difficult, but it’s actually so much easier! Most of the recipes have very little ingredients. Take for instance my banana pancakes this morning. Here’s the ingredient list: 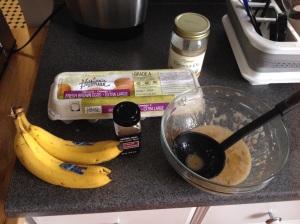 -Lots of cinnamon (my only cinnamon measurement)

-Coconut oil for the pan

Mix together the banana, eggs and cinnamon in a bowl, throw it on the the pan heated with coconut oil and that’s it! The pancakes came out a little crepe like, but oh so delicious! I topped them with a little peanut butter and sliced strawberries. OMGood. This is what Jack Johnson’s songs are all about.

Don’t forget you still need to add the milk and eggs! This isn’t just about the pancakes. There are probably lots of things I’m making unnecessarily complicated when it could be easier (and better). Keep it simple stupid (or keep it stupid simple). Can you think about anything else in life you can simplify, simplify, simplify? Food for thought.